In the last decades, a major effort has been devoted to better establish the link between core-collapse (CC-) supernovae (SNe) and their progenitor stars, and thereby to clarify the evolution of massive stars.

Indirect clues about the SN origin can be derived from the interaction of the material dismissed during the explosion with dense circumstellar medium lost by the progenitor during its turbulent life, or from their light curve and spectral evolution.
- Light curves: Physical parameters from the SN explosion like the kinetic energy of the explosion, the total ejected mass, the mass of $^{56}$Ni synthesized and the radius of the progenitor, can be estimated through the fit of the SN bolometric light curves by semi-analytic functions (e.g. Arnett 1982, ApJ, 253, 785) or more sophisticated hydrodynamical models (e.g. Blinnikov et al. 2000, ApJ, 532,1132).
- Spectral evolution: SN spectral time evolution are a scan through the SN ejecta. They are important to study the chemical compositions of SNe and their progenitors, and the kinematic of the SN ejecta. In particular, at nebular phase of SNe (>150 days) the ejecta become optically thin and reveal the nucleosynthesis that took place in the very centre of the exploding star. In this way, a single high quality spectrum taken at these phases could decide the nature of the transients under study, and thus, answer key questions on stellar evolution, such as the fate of massive stars and their role in chemical enrichment of the interstellar medium (e.g. Jerkstrand 2017, Handbook of Supernovae, 795).

Still, the killer case is made with the direct identification of the star prior to explosion. In recent years over a dozen CC-SN progenitors have been identified based on the inspection of archival, pre-explosion images. The identification relies on the positional coincidence between the candidate precursor and the SN transient. This requires high spatial resolution and very accurate astrometry because, at the typical distance of the targets ($>$ 30 Mpc), source confusion becomes an issue. In practice, only HST or 8-m ground-based telescopes mainly provided by adaptive optics images can be used to accurately pin-point (with a typical uncertainty of a few tens mas) the progenitor candidate. Even so, there is always the chance of mis-identification with foreground sources or associated companion stars. Thus, a final approach is visiting the SN field when the SN has weakened: if the candidate star has disappeared, then it was indeed the progenitor, otherwise it was a mis-identification (e.g. Elias-Rosa et al. 2018, ApJ, 860, 68 and Fig. 1). 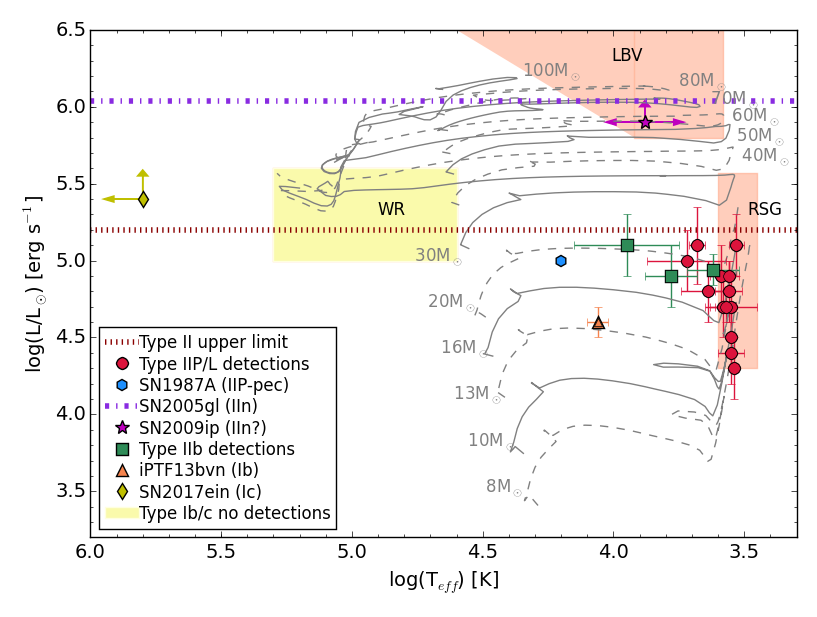 Once a progenitor star candidate is identified, its initial mass and evolutionary state before the CC can be estimated by comparing its brightness and colour (if multi-colour imaging is available) measured with stellar evolution models. Following the above or similar steps, direct detections or upper mass limits have been established for progenitors of some types of SNe, as can be seen in Fig. 2 (e.g. see also Van Dyk 2017, Handbook of Supernovae, 693)
Despite all the work done so far, the overall number of identified SN progenitors is still small. Consequently, we need to increase the sample to reach reliable conclusions.

Our interest is to connect the SN explosion with the stellar evolution field, and this requires deep and high resolution images that can be used to identify, and later confirm, the exploding stars in archival image archives of via positional coincidence.
In addition, we aim to find clues about some of the open questions related to stellar evolution:
- Why do not the red-supergiants of more than 17 solar masses explode?
- What is the real progenitor of the stripped-envelope SNe?
– What are the most massive stars in the act of dying?